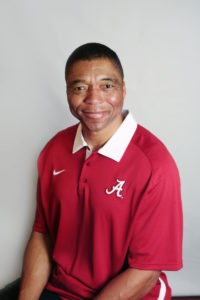 Jeremiah Castille, born to Joseph and Mary Castille in Columbus, Georgia is the 8th of 9 children.  Growing up with older siblings gave Jeremiah the opportunity to learn from their mistakes and gave him the ability to recognize how to make the right decisions with his life at a very early age.  Jeremiah also credits his good decision making with his choice to attend a Catholic school for his early education.

In the second grade, Jeremiah told his teacher, Sister Veronica, that his dream was to be a professional football player.  Even at an early age, Jeremiah knew focusing on that dream helped him to continue to make the right decisions about his life so that dream could become a reality.  By the time Jeremiah was in high school, he had made the most important decision of his life, to put his trust in Jesus as his Savior.

In 1979, Jeremiah received a football scholarship to the University of Alabama.  God used the mentorship of Coach Bryant to help him grow from being an 18-year-old boy into a 22-year-old young man.  Coach Bryant who instilled courage, discipline, vision, leadership, character, class and humility in midst of success tremendously impacted his life.  In the 1983 NFL Draft, Jeremiah was drafted by the Tampa Bay Buccaneers and the dream he had shared with Sister Veronica had come true. Jeremiah’s first year in the NFL allowed him to go back to the University of Alabama and finish his undergraduate degree in Broadcast Communications.

1983 proved to be a great year for Jeremiah.  His dream of being a professional football player had come true, and even better, he married his high school sweetheart, Lori Jean Flakes.  They soon began growing their family and today are the proud parents of three boys and three girls, Timothy, Simeon, Leah, Rachel, Caleb and Danielle and five grandchildren.  All six of the Castille children have followed in their father’s footsteps and have attended the University of Alabama.

Jeremiah ministered to the players during his four years at Tampa Bay and two years at the Denver Broncos.  He always saw football as a means to witness to his teammates. While Jeremiah loved football, he loved God more and after six years in the NFL, God called him out of the game.  Because of his love for God Jeremiah was able to walk away from something he loved and dreamed of since the second grade with no regrets. In 1995, Jeremiah moved to Birmingham to coach and teach at Briarwood Christian High School. The experience God gave him coaching and teaching helped prepare him for his ongoing ministry.

In 1999, Jeremiah was ordained as a minister at The Church at Brook Hills and he and Jean founded Jeremiah Castille Foundation with Isaiah 61:1-4 as the foundational scripture.  In 2001, Jeremiah became the chaplain for the University of Alabama football team and continues to serve in that capacity today. Jeremiah feels privileged and honored to serve the team and coaches at his alma mater, and where the dreams of a second grader came to fruition.